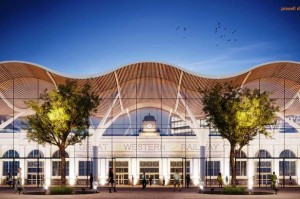 £100m plans to transform Cardiff Central Station to be at the heart of one of the most ambitious commercial development schemes ever seen in Wales have been revealed. The scheme would see the current railway station transformed with a significant increase in the size of its concourse – its existing art deco designed facade maintained – and potentially more than 340,000 sq ft of new office and retail space built within its enlarged footprint and on land on its south side. If realised it would also have a hugely positive economic impact on the city and its efforts in attracting more jobs and investment – working alongside the Capital Square scheme in front of the train station, which will be location for BBC Wales new 135,000 sq ft new headquarters, and the wider Central Cardiff Enterprise Zone.

The plans are being driven by route managing director of Network Rail Wales, Mark Langman and his team. Working with Cardiff-based architects Powell Dobson over the last eight months on a masterplan, Network Rail will now work up a more detailed design and business case with a view to submitting its plans to the UK Government’s Department of Transport for inclusion in the next round of funding for major rail infrastructure projects – the so called control period six (CP6) from 2019 to 2024.

Network Rail Wales is looking to build a team Wales approach to realising the project – which already has the backing of the Welsh Government and Cardiff Council. Confirmation of approval from the DFT would come in the High Level Output Specification statement in 2017, which will outline which projects will be taken forward for funding in CP6. The ambitious project could include:

Subject to approval work, the project could start in 2020. However, it is possible that construction of the multi-storey car and commercial developments on the three acres of land on the south side owned by Network could start before then. Cardiff council has identified two sites for the transport hub: land at the current site of Marland House and the NCP car park north of the train station and Network Rail’s existing surface car park just to the south of the train station.