Thirteen contractors have won places on two frameworks set up to deliver the expansion of Bristol Airport to handle up to 10m passengers a year. Work has been broken down into civils and building frameworks with Morgan Sindall winning a place on both contractor panels based on the strength of its performance on other UK airport projects.

Projects expected to be delivered via the four-year framework include the expansion of the airport terminal to almost double its size, new office accommodation for airport staff and retail space, enhanced public transport infrastructure new aircraft parking stands; two multi-storey car parks and an on-site hotel. There will also be a new underground fuel storage facility built. The scheme also provides on-site renewable energy generation from wind turbines and a biomass facility, which generates heat for the expanded facilities. 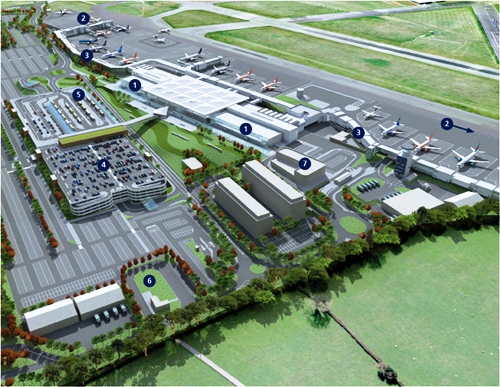 1.    Expansion of the Passenger Terminal The existing terminal will be extended to the east and west, doubling the size of the building and delivering increased capacity at security and immigration, and improving passenger comfort levels.

2.    Aircraft Parking Additional space will be required to accommodate aircraft, so the existing apron (the area on which aircraft are parked) will be extended to the east and west.

3.    Walkways Two walkways (or piers) will serve the extended aprons, enabling passengers to walk between aircraft and the terminal building and reducing the use of buses to board and disembark flights.

4.    Additional Car Parking Alongside challenging targets for increased public transport use, some new car parking facilities will be required.  Development will be concentrated on the north side of the airport.

5.    Public Transport Interchange Using the top level of the multi-storey car park, a new public transport interchange will provide convenient pick and drop off facilities for buses and coaches.

6.   Fuel Storage A new underground storage facility for aviation fuel will be located in the north west corner of the long stay car park.

7.    Office Building Located to the east of the existing control tower, office space will be used by airport and airline staff.