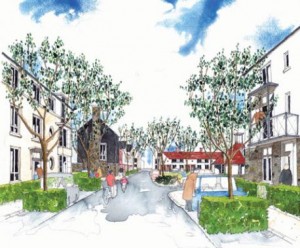 Plans have gone on display in Newport this week for a proposed £25 million housing development. Around 250 houses could be built on the site of the former Pirelli Cables factory which has been derelict since the factory's closure in 2003. The Seren Group is in the process of buying the land from the Welsh Government which had gained outline planning permission for a development at the site in 2010.

The Seren Group has come up the idea of a Garden Village drawing on the traditional arts and crafts style of housing adding front and back gardens, trees, hedges, parks, play areas and allotments. The site would contain a mix of mainly two and three bedroom family homes but also some four bedroom homes and a small number of one and two bedroom apartments.

The development's Director Neil Barber said this will be mixed tenure with some outright sales and shared ownership. He said the main point of access will be via Telford Street but said there will a controlled level of access via Wednesbury Street.

A meeting for Wednesbury Street residents was held on Monday night where ward Councillor Allan Morris said residents were supportive of the scheme in general but were opposed to access via their street. Cllr Morris, who was at the meeting on Monday, said their views will be taken into consideration.

He said "There are a few specific issues that concern people and we will work with the residents and the developer to come to the best solution possible. This really is all round positive news for Lliswerry. There is potential to clear up an eyesore, create jobs and put a roof over people's heads."

Mr Barber said they will review the responses from this week's consultation before a detailed planning application is submitted to Newport council in the spring. Another exhibition will be held at the Mary Dunn Club today between 2pm and 6pm.