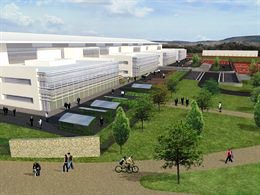 Aberdare pupils will soon be studying in a new state-of-the-art secondary school after councillors gave the £50m plans their seal of approval. The ambitious project, which also features a new leisure complex and athletics track, will also feature a skate park, playground and room for 600 car parking spaces. It will replace three current Cynon Valley comprehensives and the Michael Sobell Sports Centre at the Ynys site.

Preparation work for the education facility was well underway before the plans were rubber-stamped, when extensive roadworks were carried out to improve access routes for builders. The athletics track was also demolished last summer to the anger of some sporty residents. Planning permission has already been granted for replacement allotments, a new road access bridge and an all-weather sports pitch.

Aberdare Councillor Mike Forey, speaking at the council’s development control committee meeting on April 9, said: “This is a landmark event for Aberdare. It will be a very prominent building which will have a massively beneficial impact on the town. Economic footfall will increase in the town centre and pedestrian routes into the town have also been improved.”