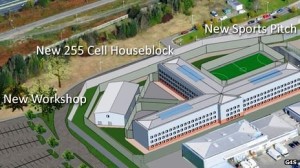 Plans have been unveiled to show a £35m expansion of Parc Prison in Bridgend that will see the privately-run jail expanded by 387 places. As well as the new cell block, the company which runs the prison G4S said a new visitors' centre, prison workshop and educational facilities would be built. The work will also include a new car park with 350 spaces, extended perimeter walls and security fencing. It is expected that an additional 78 jobs will be created.

The Ministry of Justice gave the initial go ahead in January but more details were released in the wake of a series of announcements on UK prisons. Preparatory work has now started in Bridgend and the first prisoners in the new block - which has more than 200 cells - are expected to arrive by December next year. The prison, which opened in 1997, will see its eventual capacity increase to 1,723.

David Morgan, Managing Director of G4S Care and Justice Services, said: "This is an exciting time for the team at Parc and we are pleased to have been selected to deliver this project on behalf of the Ministry of Justice. As well as providing new jobs for the area, the new house block when completed will allow more prisoners to be located nearer to their homes and families, which has been proven to be an important factor in helping prisoners in their rehabilitation on release."