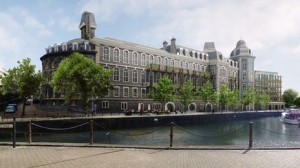 A scheme to redevelop the former Bristol General Hospital building has been passed by city planners.  Developers, City & Country Group, wants to convert the grade II listed site in Guinea Lane into 190 flats and 10 commercial units.  It is the developer’s first project in the south west and will see the grade II-listed waterfront building restored in the city centre. The plan also includes building a new 8-storey building on spare land on the site.

Chief executive of City & Country Group Helen Moore said the decision was a "clear vote of confidence" in its vision to regenerate the Bathurst Basin landmark building. She said "Our proposals will generate over £170m of economic activity locally, including a significant number of new jobs created during the construction programme." Ms Moore described the site as a "nationally important heritage asset" and one of Bristol's most iconic buildings.

A previous planning application was refused in August after Bristol City Council said the developer needed to make more of a contribution to the community. But the section 106 dispute is now understood to have been resolved. Following an independent review, local authority planning officers then recommended permission be granted.

After the planning application was refused, City & County planned to appeal, but the local authority agreed to an independent review to decide how much the Section 106 payment should be. Following the review by BNP Paribas, which found the original viability report to be flawed, planning officers agreed to recommend the developers' proposals to restore the landmark building for approval.