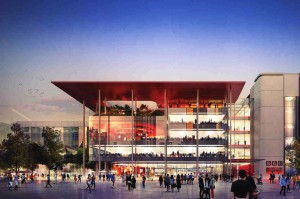 The BBC has announced the appointment of Capita to project manage the delivery of the new 150,000 sq ft headquarters for BBC Wales in the centre of Cardiff. Last month it was confirmed that the public service broadcaster has chosen a site at the Capital Square development in front of Cardiff train station as the preferred location for its new headquarters. Work on the building, designed by world leading firm of architects Foster + Partners, is expected to start next summer. Due to open in 2018, the new centre will be roughly half the size of BBC Wales’ current headquarters in Llandaff.

The building will be housed on the site of the current bus station, for which Cardiff council is committed to building a replacement integrated transport hub. It is currently evaluating a number of options, including on the site of the nearby Marland House office block. The BBC Wales centre will form part of the wider Capital Square development, being spearheaded by Cardiff-based property development firm Rightacres.

Welsh language broadcaster S4C has already announced it plans, in principle, to share some broadcasting services at the new centre. BBC Cymru Wales has confirmed the new broadcast centre will be expected to meet the UK’s top environmental standard (BREEAM outstanding) – a benchmark already achieved at its Roath Lock drama studios in Cardiff Bay, which opened in 2011.