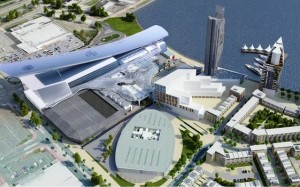 Kier Group has got the go-ahead to start work on its £16m ice arena building contract in Cardiff Bay. The contractor was due to start work last August on the new home for the Cardiff Devils ice hockey team. But technical problems with planning documents delayed construction. Developer Greenbank Partnership is behind the 3,000-seat ice arena at Cardiff Bay’s International Sports Village and has now formally signed the contract with Kier.

It forms the first phase of a much larger £250m scheme, which includes a 250m snow indoor ski slope, built above a 1,300-space multi-storey car park and shopping centre. Further phases also include a 32-storey landmark tower, luxury hotel and flats.

Cardiff Council leader Phil Bale, said: “I am delighted that the start of construction for this £16m flagship development will begin soon. “This is the next exciting phase of the £400m investment in the International Sports Village and is excellent news for the construction, leisure and tourism industries.

“This development will bring jobs, investment and another iconic state-of-the-art facility to Cardiff, further enhancing the city as a world class sporting capital. When completed next summer, this arena will attract tens of thousands of visitors, as well as providing additional facilities for residents living in this part of the city.”