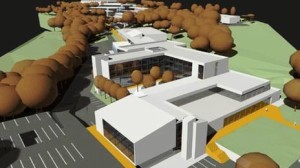 Plans for a £40m college campus have been unveiled in Swansea which includes the redevelopment of an old hospital. Gower College wants to revamp Tycoch, one of its seven campuses, and redevelop Hill House Hospital behind it to create one site. The plans include four new buildings housing college departments such as catering and sport. Also a new sports centre is also planned which would be open to staff, students and the public. Gower College Swansea has around 15,000 full and part-time students and 1,000 staff.

The further education college is applying for 50% grant funding for the scheme from the Welsh government. Work is also taking place at the college's Gorseinon campus, which includes a teaching block and a recently completed new common room and refectory. Abertawe Bro Morgannwg University Health Board currently occupies two of the wards at Hill House Hospital with day patients, and will vacate the premises by the end of December.

Paul Harris, the college's vice-principal overseeing the Tycoch proposals, said while the plans were in their early stages, they signified an exciting time for the college's future. "The development will not only mean improved teaching facilities for students and staff but also amenities that the public can benefit from with the new sports centre and barn together with the relocation of the Vanilla Pod training restaurant," he said.

An exhibition of the Tycoch development is being held in the reception area of the Tycoch campus until Thursday from 10:00 am to 19:00 pm, with members of the project team available between 16:00 pm and 17:00 pm to answer any questions. The college said letters had been sent out to 300 nearby residents inviting them to attend and give their feedback. A planning application will be submitted to the council following the consultation exercise.