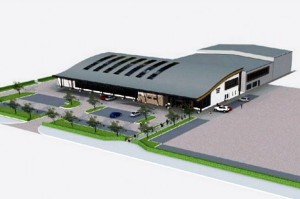 A first look at what the plans for the £13m replacement for Port Talbot’s iconic seafront Afan Lido sports centre will look like have been revealed with new artist's impressions that have been released. The new sports centre will have an eight-lane 25m swimming pool with spectator seating, a learner pool, changing facilities, a cafe, soft play area, community meeting rooms, a youth club, a fitness gym, a dance studio/dojo and a sports hall with spectator facilities.

The landmark Afan Lido on Aberavon’s seafront was one of Wales’ first purpose-built leisure centres when the Queen opened it in 1965. But a fire which broke out in the pool area in December 2009 quickly spiralled into a major blaze. The building was destroyed but a new replacement on a different venue on Aberavon Beach has now been agreed.

Neath Port Talbot Council leader Ali Thomas has welcomed the proposed “21st century facilities for visitors and locals to enjoy”. Members of Neath Port Talbot Council’s cabinet, who will meet on Wednesday to discuss progress on the project, have been told it should be ready to open in the first quarter of 2015. A planning application will be submitted to the authority in September for construction work to start in December this year.