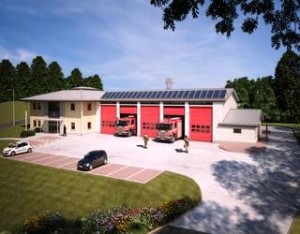 Interesting local project with building plans now underway for the new Aberbargoed fire station which will replace the Cefn Fforest and Bargoed stations. Plans for the new station include five fire engine bays, a conference training room, a community room and training tower. The land for the station is a former electricity sub-station site in Aberbargoed, which was used as a site compound during the construction of the Angel Way road. The build of the community fire and rescue station will take approximately 10 months to complete and occupancy should take place in early 2014.

It will be a part two storey and part single storey building. The facility will have a training tower with associated roof training area, plus a secure yard area and offices. There will also be a dedicated area for the South Wales Ambulance Service which will consist of an office, secure drugs store, and changing facilities, which will be accessed via its own separate entrance in the secure yard area.

Chief Fire Officer at South Wales Fire and Rescue Service, Huw Jakeway has said that this is an opportunity to create a new multi-million pound community fire station, which will work with partner organisations to deliver youth engagement and prevention programmes, young offender schemes and education programmes. It will include training facilities, with the new station set to be available for use by locals and community groups.