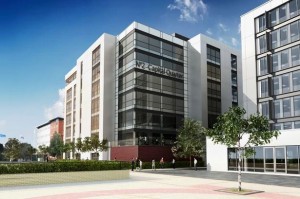 It has been confirmed that work will start next month on a new 85,000 sq ft speculative office scheme in the Capital Quarter between Callaghan Square and Splott. The developer behind the £150m eight acre scheme, Cardiff-based property development firm JR Smart, has also confirmed it has struck a deal with Viridis Real Estate which will now develop a 580 bedroom student accommodation complex on 1.74 acres. The accommodation will be opposite the University of South Wales’s creative industries Atrium campus. No2 Capital Quarter is scheduled for completion by Christmas next year.

A £2.5m pedestrian bridge linking the development over the Great Western Mainline to the retail heart of the capital was being formally opened by Business Minister Edwina Hart today. The Welsh Government acquired No1 Capital Quarter in a £15m deal last year. A condition of the acquisition was that JR Smart built No2 Capital Quarter. As well as the pedestrian bridge the completed and now Welsh Government-owned No1 building was also being officially unveiled today by Mrs Hart.

John Smart, Chairman of JR Smart, said: “These transactions coupled with the already strong interest in No1 confirms Capital Quarter as the pre-eminent mixed use scheme in Cardiff. By furthering our commitment to speculative development, occupiers are able to see the benefits in terms of location and quality of environment the development offers. The good news for Cardiff and the South Wales office market is that we are building more grade A space.”

Mrs Hart added: “The opening of No1 Capital Quarter is a significant milestone in our plans to ensure Central Cardiff Enterprise Zone delivers new jobs, attracts new investment and provides a great environment for business growth.”