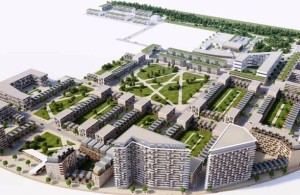 Plans to transform a run-down industrial estate into a new community with more than 2,000 homes have moved a step closer. Currently a brownfield site which is home to a number of industrial units, Cardiff Council announced plans last October to transform the Dumballs Road area of Butetown into a new housing development. Now the council has released further details about the proposed regeneration scheme after entering, in principle, into a long-term lease arrangement, of up to 45 years, for the use and management of the scheme’s affordable housing.

Cardiff-based developer Bellerophon plans to regenerate 33 acres of the land in an area recognised as one of the most important brownfield regeneration sites for housing development in the council’s Local Development Plan. It could generate 3,000 construction jobs and an extra 500 long term jobs for the area. Bellerophon wants to provide 2,070 new homes - around 950 of which could be affordable homes. This could include 158 one-bedroom, 757 two-bedroom and 35 three-bedroom homes.

The council will need to carry out further work into the financial and commercial risks to make sure it is affordable and represents value for money. It also agreed to help with the relocation of existing businesses to elsewhere in Cardiff. The council is considering appointing a dedicated project manager for the scheme and has appointed external financial advisors to carry out a financial assessment of Bellerophon’s proposal. Bellerophon is expected to submit a new planning application for the housing by the end of the month.