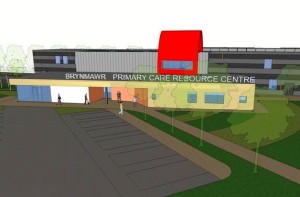 A new £3.6m health centre will open in Brynmawr after funding was officially confirmed today. Health Minister Mark Drakeford announced that funding is available for the new primary care resource centre, which will serve 13,000 patients. The centre will also house secondary care community services such as district nursing, community dental service, podiatry, patient education programmes and public health awareness sessions. Building work is estimated will take approximately 12-months and is expected to be open for patients by the summer of 2015.

Speaking of the investment, the minister said the development will take some pressure away from local surgeries. He added: "I am pleased that the Welsh Government will be contributing the recurrent revenue funding totalling £191,268 per annum to underpin the development of the new Brynmawr Primary Care Resource Centre. The new facility will allow the current Blaen-y-Cwm and Aparajita Surgeries, as well as Aneurin Bevan Health Board, to expand the care they currently offer to residents in and around the Brynmawr area."

Judith Paget, Chief Operating Officer at Aneurin Bevan Health Board, said: "We were delighted with the minister’s announcement on our future plans for a resource centre in Brynmawr. This will allow the Health Board to continue to move forward with our Clinical Futures Strategy and provide important investment in our primary care infrastructure for the people of Brynmawr and surrounding areas to further improve services for local people."