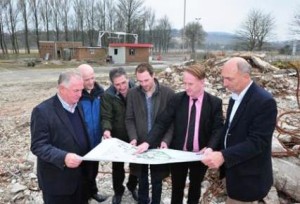 Outline planning permission has been issued following an agreement between the developer and Newport City Council over the Jubilee Park scheme to include the build of a new school. Walters Land (Rogerstone) Ltd, who are planning to build almost 1,000 homes at the former Alcan metals site, has finalised a legal agreement promising a new school and community facilities. Remediation work on the former Alcan site is now set to begin this September. House building is then hoped to start in April 2014 with construction to take place in four phases over a ten to 12 year period.

The agreement includes provision for affordable housing, a new primary school, a contribution towards secondary education, a new local centre and community facilities, and public open space on the site. The primary school is planned to have capacity for 300 students while the new local centre could be equipped with new shops, doctors' surgery, local offices, and a community space. It also covers improvements to roads around the site. The firm says that promises of new jobs for the local economy are also encompassed in the legal agreement.

It has been estimated the development could create more than 1,800 jobs on and off site. Around 530 would come from preparation of the site and construction, with another 1,135 would be created in the regional economy as a knock-on effect, such as through suppliers to construction and in the local centre. Mandrake House is to be set up as a site office, with members of the Walters team available to deal with queries.