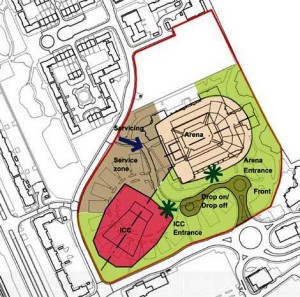 Cardiff County Hall is the best site for a new city convention centre and indoor arena, according to an internal Cardiff council document. The finding raises questions over the future of the 35-year-old building and follows previous reports the Labour-run authority is considering relocating its headquarters. But opponents say building a replacement County Hall elsewhere in the city would potentially cost the city’s taxpayers tens of millions of pounds.

The council hired urban development consultants Aecom to appraise five locations that are being considered for a combined International Convention Centre (ICC) and Cardiff Arena. County Hall, at Atlantic Wharf in Cardiff Bay, was found to be the best location because it is already owned by the council and is big enough to combine both schemes. The Brains Site, next to Cardiff Central railway station, was ranked a close second, followed by the Red Dragon Centre, Callaghan Square and lastly vacant land behind the Wales Millennium Centre (WMC).

The council wants the £70m ICC and £80m arena to be built on one site to give Cardiff an advantage over other cities, according to the document. The ICC would have a 1,350 seat hall, 1,350 banqueting hall and 5,000sq m exhibition space, while Cardiff Arena would have capacity for 8,500 to 11,000 people and be designed to host both concerts and sports events.

Aecom assessed the sites against four criteria – site context; site fit; access; servicing and deliverability. The 61,650sq m County Hall site, the paper says, has a unique setting alongside a dock, will enhance the Bay as a visitor destination and bridge the gap with the city centre. It suggests the ICC would rise up on the site of the council’s staff car park, while the arena would be on the footprint of County Hall, with the main access off the roundabout at Hemingway Road.

A council spokesman said it would be “inappropriate” to go into any detail about the council’s plans for a convention centre and indoor arena until the comprehensive Cardiff Enterprise Zone proposals are announced by the Welsh Government. The council remains committed to seeking an early solution to enable this development to succeed and remain in discussions with the Welsh Government,” he said.