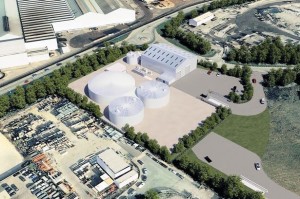 Plans for an energy-generating £15m food scraps recycling plant in Cardiff’s old docks have been given the go-ahead with Cardiff Council’s Planning Committee granting planning permission for an “anaerobic digester”. The £15m food scraps complex in city's old docks is to be built on land next to Welsh Water sewage treatment works, at the junction of Rover Way and Tide Fields Road in Tremorfa. Approval is based on Kelda Organic Energy winning the contract.

Kelda Organic Energy Ltd is one of four companies bidding for a 20-year council contract to recycle 35,000 tonnes of food waste collected from across Cardiff and the Vale of Glamorgan. The other shortlisted bidders are Agrivert Limited, GENeco and Shanks Waste Management Ltd. The Cardiff Organic Waste Treatment Project contract will be awarded early next year. If successful, Kelda says it will start construction in the middle of 2014 and start operating in early 2016.

Anaerobic digestion (AD) uses bacteria to break down food leftovers to produce a “biogas” of methane and carbon dioxide, which is used to generate renewable electricity. Kelda has said the AD process would be “odourless” as the food would be broken down in enclosed tanks. The odour contains methane that will be captured to produce gas and electricity that will be supplied to Welsh Water.

Cardiff council’s household food scraps are currently sent 50 miles away to be processed by an “in vessel composting” plant in Sharpness, Gloucestershire. The council has previously said its Cardiff Organic Waste Treatment Project contract will help it meet strict Welsh Government recycling targets.