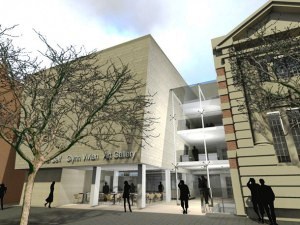 Work is to get underway on a £6 million project to refurbish Swansea’s historic Glynn Vivian Art Gallery. The architects for the scheme are Powell Dobson of Swansea and Opco Construction, the company appointed to lead the scheme, will start major structural works on site in February. The 65-week project includes extensive alteration works to the 1970s wing, the conservation of the original 1911 gallery, and an extension to the rear of the Alexandra Road buildings.

The refurbishment will also include a new entrance and shop at street level into the 1970s wing, a new passenger lift, more space for displays and exhibitions, a new lecture space and community room, a new welcome area for learning programmes, and a dedicated library and archive. It’s expected the gallery will re-open in the autumn of 2014.

The refurbishment project is being funded by the Welsh Government, including £550,000 from the Swansea Regeneration Area programme, the Arts Council of Wales and Swansea Council. Money has also been secured through the Building Enhancement Programme grant scheme run by Swansea Council and funded by European Regional Development Fund. The gallery is also supported by a £576,000 grant from the Heritage Lottery Fund to develop a learning and participation programme relating to the original Glynn Vivian bequest.

Cllr Nick Bradley, Swansea Council’s Cabinet Member for Regeneration, said: “A great deal of preparation has already taken place to pave the way for this exciting refurbishment scheme, but the start of major structural works on site next month means we’ll soon be able to see tangible progress. This scheme strikes a balance between preserving the original character of the building and providing a visitor experience that’s befitting of the 21st Century. When complete, it will help Swansea cement its status as a leading city of culture.”

Opco Construction employs 70 staff and operates in South Wales, the South West and South East of England. Nigel Coulter, Opco’s Regional Managing Director, said “As a construction business with its roots in Wales, Opco was extremely proud to win this contract for what’s one of the most important and recognisable buildings in the country. It’s an iconic and important building that’s universally recognised as being of high architectural and historic significance.”