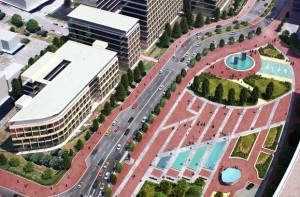 Work could start shortly on a new 90,000 square foot office scheme in the centre of Cardiff. The Welsh Government is currently evaluating a shortlist of tenders from construction firms bidding to build the office block at a near five-acre parcel of undeveloped land in Callaghan Square. The site was acquired from MEPC for £7.2m with planning consent for 500,000 sq ft of new offices. The building, at a cost of around £15m, is expected to be completed by the end of 2015 at the latest.

It had been in negotiations with Cardiff Council with a view to the authority acquiring the site for an asking price of at least £7.2m. While not identifying what it would do with the site if acquired it could be an ideal location for the authority’s stated aim on realising a convention centre and indoor arena for the capital. It might now have to look at other locations if the Welsh Government, as now seems likely, proceeds with construction of the 90,000 sq ft building.

However, if Welsh Government doesn't add to the planned building with further office developments it is still feasible that the site could still accommodate the council’s infrastructure requirements – particularly if industrial units adjacent to the land are acquired. A Welsh Government spokesperson said: “We are currently considering tender submissions for the development of building number one at Callaghan Square.”